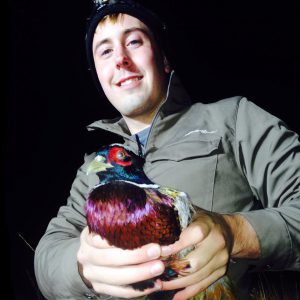 Bennett Grooms is a Ph.D student in the Department of Fish and Wildlife Conservation working in Dr. Ashley Dayer’s human dimensions lab. He started Fall of 2017 and is researching the human dimensions of wildlife viewers with the VDGIF to construct a Wildlife Recreation Management Plan for the state of Virginia. Specifically, he is interested in how differing outdoor recreation groups view and interact with the agency, including how the behaviors and attitudes of those groups influence their participation in conservation and wildlife viewing programs.

Bennett received his B.S. in Wildlife Sciences with minors in Captive Wild Animal Management and Biology from the University of Missouri in 2014, graduating with magna cum laude honors. During his undergraduate training, he worked with captive wildlife husbandry in South Africa and several zoos in the U.S. before transitioning into field research with the Missouri Ozark Forest Ecosystem Project, where he researched neotropical bird nesting behaviors. Bennett then earned his M.S. at Arkansas Tech University (2016) under the advisement of Dr. Rachael Urbanek, studying citizen science and the collective anthropogenic and environmental influences acting on flora and fauna communities in Arkansas State Parks.

Bennett also has a passion for teaching and conservation education, having worked as a lab instructor and tutor for classes in zoology, wildlife management, and animal behavior. He is deeply interested in educating and involving the public in flora and fauna conservation, and hopes to bridge the gap between formal science and the recreational enjoyment of nature with his current and future research.