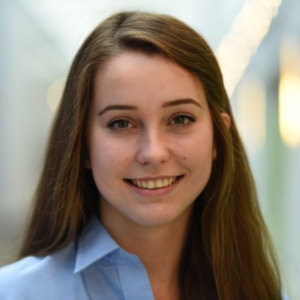 Rachael is a Master’s student in the Department of Fish and Wildlife Conservation working in the Dayer Human Dimensions Lab. She is advised by Dr. Ashley Dayer and additionally mentored by Dr. Amy Johnson from the Smithsonian’s Virginia Working Landscapes program. Her research focuses on the human dimensions of conservation on private lands. She will be working with private landowners and citizen scientists in order to better understand the variables that drive private landowners’ perceptions of and engagement in conservation behaviors.

Rachael is originally from Omaha, Nebraska. She attended Nova Southeastern University in Fort Lauderdale, Florida and graduated magna cum laude with a Bachelor of Science in environmental science and a minor in geographic information systems. While an undergraduate, she interned with the NASA DEVELOP National Program analyzing remotely sensed data in order to discern the effect water quality parameters had on oyster reef health in the Mississippi Sound. After graduating, she worked as a biologist and regulatory project manager for the Army Corps of Engineers Los Angeles and San Bernardino Counties District where she ensured that all jurisdictional building permits complied with federal environmental laws. Before coming to Virginia Tech, Rachael served as a research intern for the Canadian Organization for Tropical Education and Rainforest Conservation in Costa Rica working with leatherback, green, and hawksbill sea turtles to collect critical nesting data for species conservation plans.