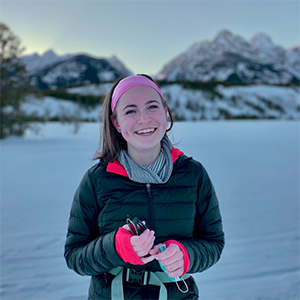 Emily joined the Dayer Human Lab in the Spring of 2021 as a Master’s Student in Fish and Wildlife Conservation. Her research in the Dayer Lab focuses on a multi-state study of wildlife viewers. Emily spent much of her childhood in Germany, where she finished high school in 2016. She was inspired by some of Germany’s and the European Union’s progressive environmental policies and sought an education that would allow her to learn more about governance and the intersection of humans and the environment. Emily graduated Magna Cum Laude from Colorado State University in 2019 with a B.S. in Human Dimensions of Natural Resources. As an undergraduate student, Emily participated in several social science research projects and appreciated the opportunity to apply classroom knowledge to the real world. In 2019, Emily completed her undergraduate honors thesis, “Carbon Indicators: A Comparative Analysis of the Californian and European Union Carbon Scheme” which reviewed the development and implementation of emissions trading schemes. That summer, Emily also completed her first wildlife viewing study in Grand Teton National Park, where she worked with the park’s social scientist to collect data at the park’s “Bear Jams” (traffic jams that formed by visitors watching the grizzly bears). After graduating, Emily worked with the Public Lands Policy Group in Fort Collins, Colorado where she researched management strategies of the US Forest Service. In early 2021, Emily returned to Grand Teton National Park, where she completed an AmeriCorp internship, again with the park’s social science branch. That season, she conducted a visitor use study, where she worked to quantify winter visitor (and dog) use of the park.