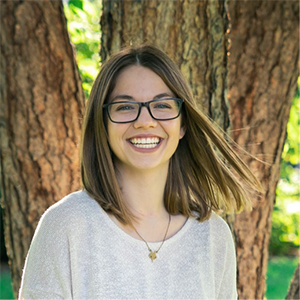 Kelsey is a master’s student in the Department of Fish and Wildlife Conservation in the Dayer Human Dimensions Lab. Kelsey’s research interests encompass all things human dimensions and the outdoors. They focus on how historically underrepresented ethnoracial groups are engaging in wildlife viewing, the mechanisms of support for donation-based state agencies, and how community science has the potential to bridge the gap between agencies and their broader constituents. She will be surveying communities across the United States, but more thoroughly in her home state of Minnesota, to help agencies understand how to best serve the shifting dynamics of their usership base. Kelsey holds a B.S. in Fisheries and Wildlife Conservation from the University of Minnesota, where her research focused on the intersection of human, animal, and environmental health. During their undergraduate career, they studied how rodenticides affect red-tailed hawk populations and how viral loads in bats are impacted by increased habitat fragmentation. After graduation, she served with the Conservation Corps of Minnesota and Iowa as the Urban Outreach Specialist for the Minnesota Department of Natural Resources, where she worked to build meaningful connections with historically underrepresented communities and create an inclusive and accessible environment within Minnesota State Parks and Trails. In their free time, Kelsey loves to be outside with her partner and two dogs and enjoys hammock camping, hiking, and climbing. When they’re stuck inside, she is an avid reader and a budding chef who enjoys experimenting with new vegan recipes and testing them on her ever-patient family.